Could This Gag-Worthy Weight-Loss Hack Actually Crush Your Cravings?

Diets are a lot like fashion. Eventually, they all come back around. And the newest (old) diet is kind of gross.

Recently, some weight-loss bloggers have made claims that taking shots of olive oil or drinking sugar water between meals prevents them from snacking and keeps their weight in check. The theory is that the bland calorie cocktails weaken your body’s association between flavor and calories, which ultimately eliminates your cravings for Haagen-Daas at 3 p.m. Sounds plausible, right?

As it turns out, psychologist Seth Roberts first promoted the idea in his book The Shangri-La Diet in 2006. Apparently, he lost 35 pounds in three months by consuming 100 to 400 calories worth of unflavored sugar water, olive oil, and bland foods eaten with his nose clipped shut, but he never performed any studies to back his idea up.

RELATED: 7 Signs a Diet Will Just Leave You Hungry, Miserable—and Even Heavier

However, the psychological theory that eating flavorless meals could somehow retrain your brain to disconnect flavor and food was not well received by the scientific community. UCLA medical professor John Ford, M.D., for one, criticized the lack of evidence supporting the diet, and wondered why Roberts had no interest in subjecting his diet trick to a scientific peer review. “All he needs now is an endorsement by Oprah,” he wrote on TCSDaily back in ’06. Ouch.

RELATED: 6 Things You Can Do at the Gym to Curb Your Appetite

Today, experts take issue not just with the fact that no study has ever proven its effectiveness, but that there’s no scientifically valid reason why this theory would work in the first place.

“It's bull,” says Georgie Fear, R.D., author of Lean Habits for Lifelong Weight Loss. “If that worked, then diet soda would also be an effective way to disassociate flavor and calories.” After all, diet soda has a lot of flavor but zero calories. (In case you’re wondering, diet soda causes weight gain, not loss.)

But the reason why this random trick has so many fans is because eating a snack between meals, even if it's a nasty one, will keep you from heading into your next meal ravenous, says Lori Zanini, R.D., a nutritionist with HealthCare Partners Medical Group in southern California.

While having olive oil could prevent hanger and keep you from overeating, so could other foods that have more health benefits, like a handful of almonds, cup of plain Greek yogurt, or chia seed pudding, says Zanini. Bonus: They all taste way better, too.

So instead of trying to take all of the fun out of food, try these five mindful-eating tips for weight loss.

All gifs courtesy of giphy.com. 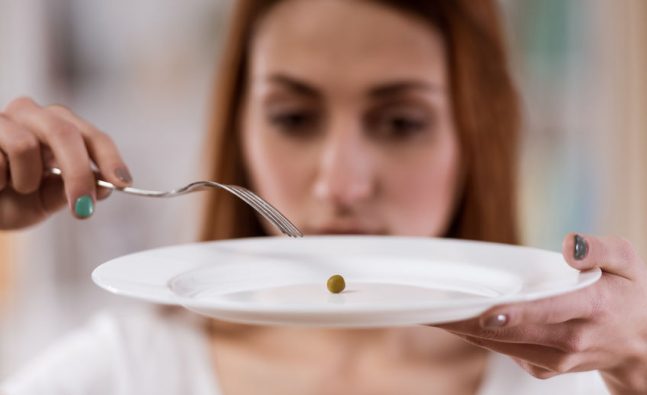 DON'T MISS
How to Lose Belly Fat at Any Age
Buy - and use - this equipment to lose weight!
Do women gain more stomach fat than men?
Develop habits to maintain your weight-loss goals
Sculpt your body for summer
How to have a healthy festive season
Ways to make daily exercise fun
Burn calories while washing your car
Crazy celeb diet tricks: The Vision Diet
How This Teacher Stopped Being in Pain and Lost 80 Pounds

Menopause cause of spare tyre but not weight gain