In completely obvious news, eating nutritionally empty foods in unhealthy amounts can make you gain weight. But can the time of day you eat affect your waistline, too? Turns out, getting the majority of your calorie intake in the first part of the day may result in a significantly slimmer waistline, according to a new from the Journal of the American College of Nutrition.

Turns out, those who ate more calories in the first half of the day lost significantly more weight and demonstrated better metabolic activity than those who ate heavily in the evening. On average, the earlier eaters lost 3.75 pounds more and trimmed an extra 33 percent off their waistlines.

Granted, it's worth noting that all participants were consuming about 600 fewer calories per day than they normally ate—and the researchers believe this certainly contributed to weight loss in both groups. However, the researchers concluded that those with an earlier caloric intake burned more calories throughout day, just by going through their daily routine (participants' fitness activity was not altered). Since all the women were less active in the evening hours, they therefore had less time to burn the calories they consumed.

Not willing to ditch big dinners completely? Thankfully, research doesn't suggest that you should pack all of your calories in the early hours: Those who lose the extra pounds only consumed 15 percent more of their calories in the first part of the day. So if you're eating 1,600 calories a day, just move 240 calories from your afternoon snack and dinner to an earlier time. Your waistline will thank you! 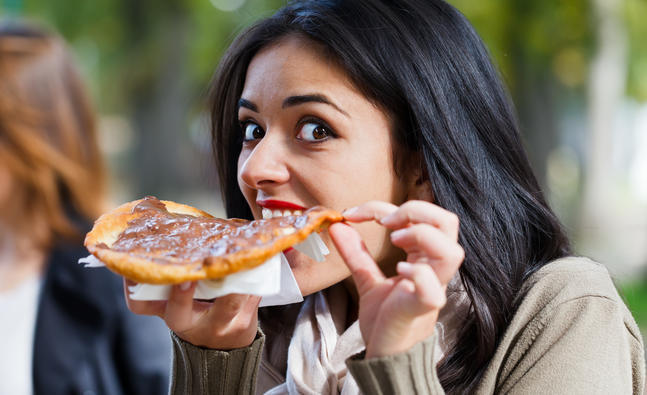 DON'T MISS
Sculpt your quadriceps and burn calories
The Secret to Sticking to Your Weight-Loss Plan
What does a day of healthy eating look like?
How I Motivated Myself to Lose More Than 100 Pounds
Tight, Toned Tummy Tips: Stop slouching!
What are empty calories?
Lose weight by cutting down on milk
How to not stress about losing weight
How To Deal With Loose Skin After an Extreme Weight Loss
Expend energy doing this exercise

Three things to remember when eating out

Use your mouth to talk instead of eat