25 Fattening Foods You Should Never Eat 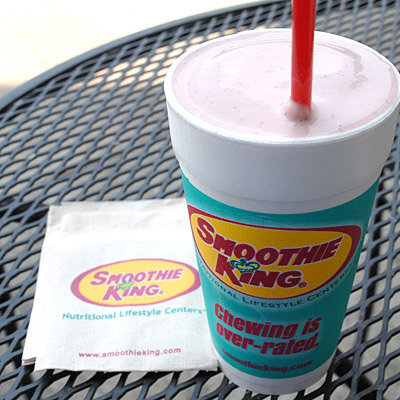 Fruit and yogurt can’t be bad, right? Wrong. Smoothies are often made with ice cream or milk and can be crammed with sugar. At least this treat gives you a heads up: It’s listed on the menu as a smoothie for people looking to gain weight.

But the calories are excessive—more than two Big Macs put together. And that’s just the small. 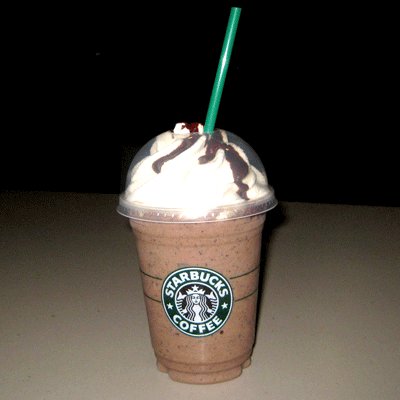 Sure it sounds bad, but how bad is it? This afternoon pick-me-up delivers nearly one-third of the maximum fat you should consume in a day, and over half a day’s saturated fat.

Choose this instead: Your best bet is a regular cup of coffee without all the bells and whistles. If you just can’t live without a Frappuccino, make it a Coffee Frappuccino Light Blended Coffee: 130 calories, 0.5g fat, 16g sugar. 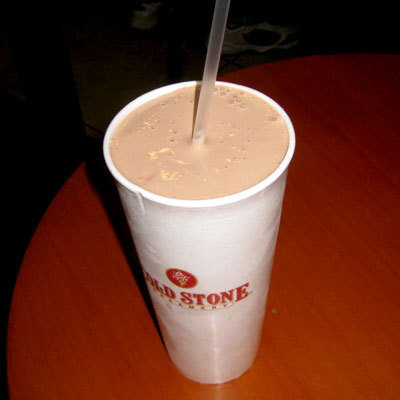 Chances are you already suspect that milkshakes aren't all that healthy. But this particular shake, made with chocolate ice cream, milk, and peanut butter, is in a class of its own. This frosty monster delivers an entire day’s worth of calories and almost three and a half times the daily limit for saturated fat.

Choose this instead: A better bet is the 16-ounce Sinless Oh Fudge! Shake, with the same chocolaty taste, but a quarter of the calories and only 2 grams of fat. 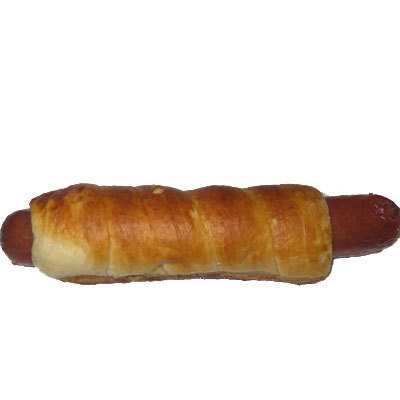 Auntie Anne’s sells snacks, not meals. But this concoction—a Nathan’s hot dog wrapped in a pretzel bun—contains almost half your daily upper limit of fat and sodium.

Choose this instead:  Go for the original pretzel without the butter and salt and you’ll whittle your treat down to 310 calories and only 1 gram of fat. Now that’s more like a snack! 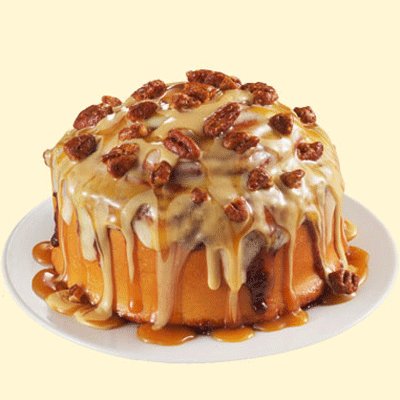 The luring scent of Cinnabon is a mall staple. But just one of these decadent pastries means trouble. They deliver about half the calories and just about all the fat you should consume in a day.

Choose this instead: Cinnabon has no options that are particularly healthy, but you can try a Minibon, designed for smaller—and smarter—appetites: 300 calories, 11g fat. 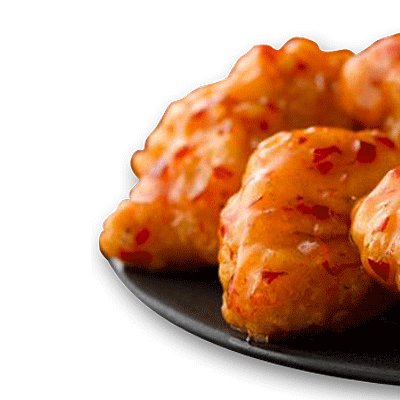 In June, Wendy’s launched this item, claiming it was “as far as it gets from fast food."

Calorie-wise, this meal isn’t that bad if it makes up your entire lunch. But it has more salt than you should have in a day, let alone at one sitting.

Choose this instead: Try the Ultimate Chicken Grill, a grilled chicken breast on a sesame-seed bun: 320 calories, 7g fat, 8g sugar. Still, with 950 milligrams of sodium, don’t make it a daily habit. 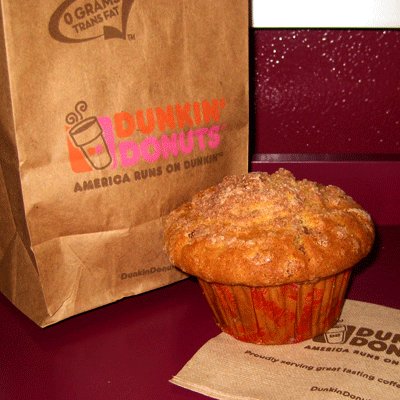 Muffins are often mistaken for the doughnut's healthy cousin. But muffins can be surprisingly high in fat.

This one is particularly offensive; you’d need to eat about three glazed donuts to match its nutrients and calories.

Choose this instead: For an alternative—but equally decadent—breakfast treat, one glazed donut is a better bet: 220 calories, 9g fat, 12g sugar, 31g carbs. 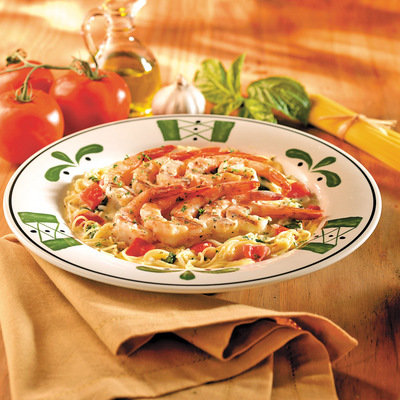 Shrimp are low-fat, low-cal, and high in protein and iron. What’s not to like?

In fact, the garlic-butter sauce in this dish helps rack up nearly two-thirds of your daily fat and about one and a half times your sodium limit.

Choose this instead: Get a lighter version of this dish without the melted cheese and with marinara sauce on the side. The Venetian Apricot Chicken is another option; it has one-third the calories and 1/10 the fat, but still packs a good deal of sodium. 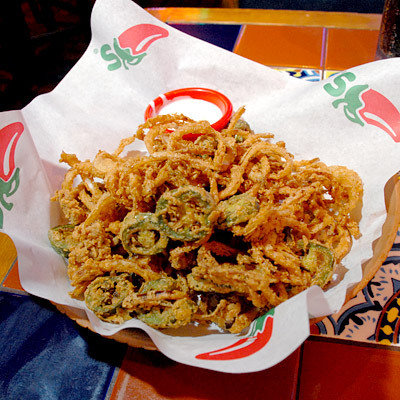 Diners and bloggers alike were outraged by the fried-onion Chili’s appetizer, the Awesome Blossom.

The unhealthy behemoth was removed from the menu, but its replacement is only a bit better. This appetizer is meant to be shared, but even one-quarter of the dish delivers an entire day’s limit for fat.

Choose this instead: Chili’s doesn’t have particularly healthy appetizers. If you must have one, try the Chips and Hot Sauce (470 calories). However, the chips' sodium is 2,790 milligrams—500 milligrams over the maximum daily intake. 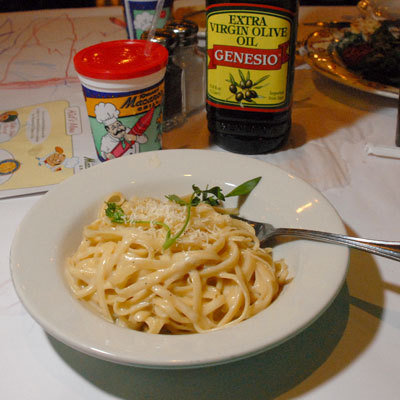 Kids’ meals, in theory, are smaller than adult portions; children simply don’t need as many calories.

Choose this instead: Coax your little ones into ordering the Grilled Chicken and Broccoli: 390 calories, 8g fat. It’s still high in sodium, so ask for sauce on the side and use sparingly. 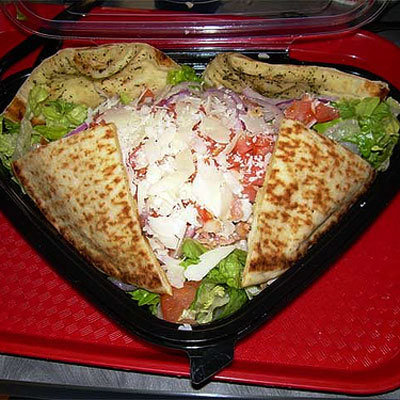 Don’t be tricked; this salad will cost you half a day’s calories. The dressing alone has 48 grams of fat, nearly your daily max. 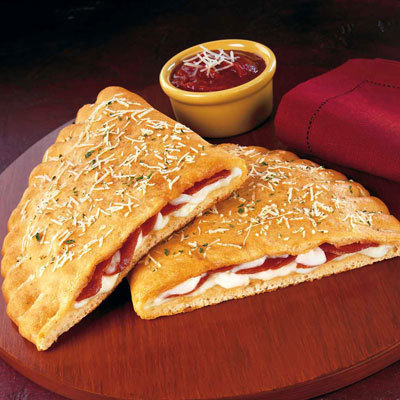 The TV commercials for this 1-pound monster feature hungry dudes who don’t want to share. One chows down and tells another, who looks on longingly, to order his own. But these pizza-crust calzones should be shared—preferably with a crowd. Eating the whole thing is akin to consuming about six cheese slices in one sitting, and it delivers one and a half times your daily limit for sodium. One serving size is one-half of a P’Zone.

Choose this instead: One slice of the Natural Veggie Lover's multigrain crust pizza has 190 calories, 6g fat, 380 mg sodium, and 9g protein. 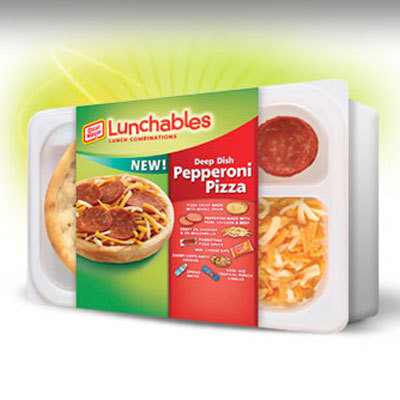 Ideally, a lunch box should strike a balance between taste, fun, and nutrition.

However, an easy prepackaged solution like Lunchables may not deliver. The nutrition info is based on a 2,000-calorie-a-day diet—that of a grown adult. The processed food is too high in fat and sodium for the average 8-year-old’s daily recommended intakes.

Choose this instead: For the same ease, try another variety of Wholesome Lunchables, like the Turkey and Cheddar Club, which comes with water and applesauce instead of cookies and fruit punch, and has 360 calories, 8 grams of fat, and 600 milligrams of sodium. 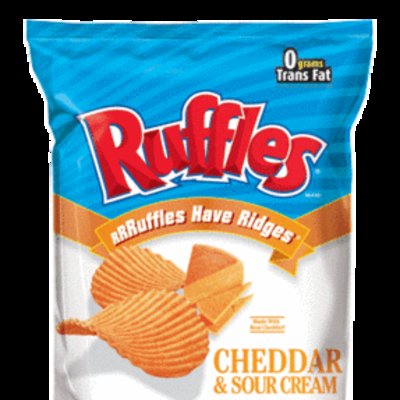 Ruffles don’t just have ridges, they’ve also have 17% of the upper limit of daily fat in just one serving. The calorie count is low, but chances are you’ll eat more than a serving, as most packages are the larger 1.5-ounce size.

Choose this instead: Try Baked! Ruffles in the original flavor. The 1-ounce serving has 120 calories, 3 grams of fat, and 200 milligrams of sodium, plus 2 grams each of fiber and protein. 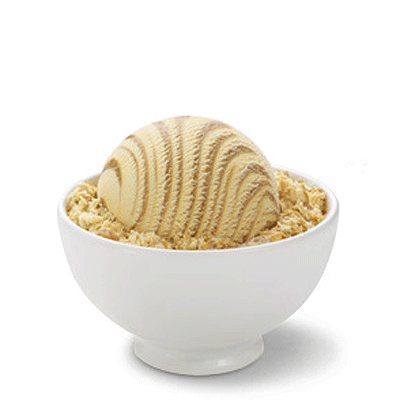 Frozen yogurt is often relatively healthy; even the most decadent flavors tend to have less fat than ice cream.

However, not all fro-yo is created equal. To be fair, this flavor does have 15 grams less fat than the regular ice cream flavor, but one serving packs 25 grams of sugar.

Choose this instead: Try a brand that offers no-sugar-added options, such as Edy’s. The French Vanilla flavor has only 100 calories, 3 grams of fat, 14 grams of carbs, and 4 grams of sugar in a 1/2 cup serving. 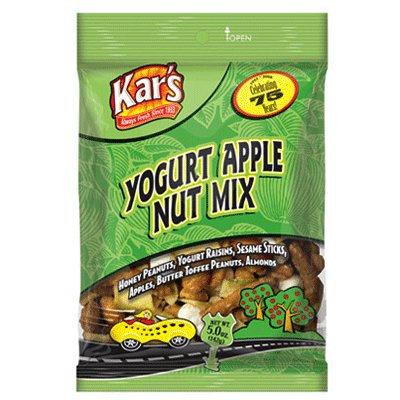 Words like yogurt, apple, and nut make this snack seem healthy. But a serving size is 1 ounce. The tiny snack, often found in vending machines, contains nearly three times as much—2.75 ounces. Bags in stores contain five times as much.

Eat a whole 2.75-ounce bag and you’ve consumed 412 calories—the equivalent of one and a half Snickers bars.

Choose this instead: Select a healthier trail mix, like Peeled Snacks. A 2/3-cup serving of the Fruit & Nuts FigSated mix has 150 calories and 6 grams of fat. 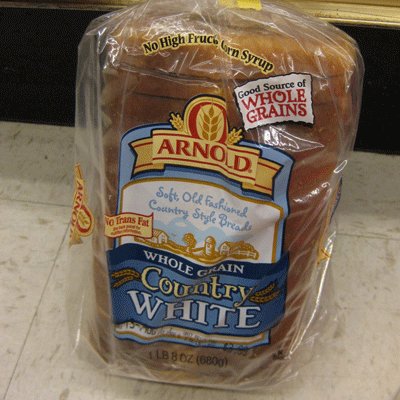 Don’t fall for the “whole grain” marketing trick without knowing all the facts.

While “whole grain” sounds good, this product doesn't have nearly the amount of heart-healthy whole grains as products that say “100% whole grain.”

Choose this instead: Try two slices of Arnold’s Light line of breads, like the 100% Whole Wheat: 80 calories, 1g fat, 160mg sodium, 5g fiber. Or try the new Deli Flats from Pepperidge Farm. One 100% whole-wheat roll has 100 calories and 5 grams of fiber. 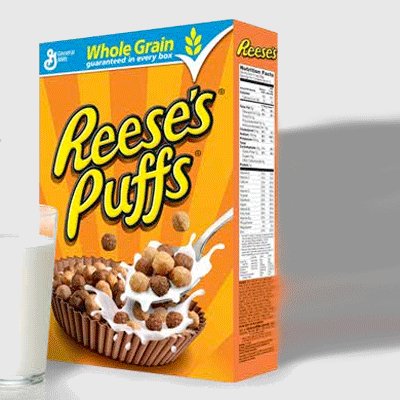 Starting your morning off with this bowl of sugary puffs may be worse than getting up on the wrong side of the bed. One serving of this breakfast treat has more sugar than an actual Reese’s Peanut Butter Cup.

Choose this instead: For an organic and natural take on the peanut-buttery puff, check out EnviroKidz Peanut Butter Panda Puffs from Nature’s Path. The same serving size with milk has slightly more calories, but less sugar: 170 calories, 2.5g fat, 7g sugar. 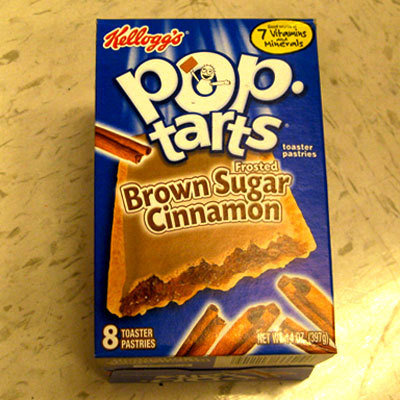 At least breakfast cereals have relatively easy-to-understand serving sizes. Pop-Tarts, on the other hand, report nutrition information for one serving, but each package contains two—and is impossible to reseal.

Eat both, and this breakfast delivers a quarter of your daily limit for fat, and more than half your added sugar for the day. 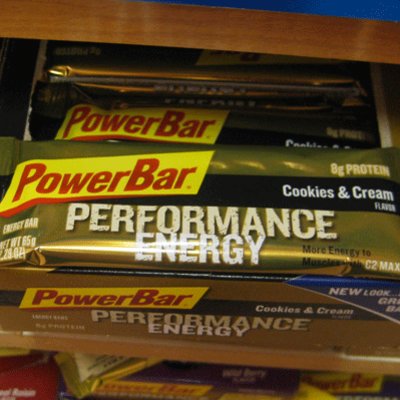 This particular PowerBar has only 1 gram of fiber and nearly three-fourths of the upper limit of daily added sugar, so there may be healthier options. (The USDA says to limit added sugar to 40 grams, or about 10 teaspoons, per day.)

Choose this instead: Try the PowerBar Harvest line. Made with whole grains, 1 Oatmeal Raisin Cookie bar still has 250 calories, 43 grams of carbs, and 22 grams of sugar, but offers 10 grams of protein and 5 grams of fiber, vitamins, and minerals. 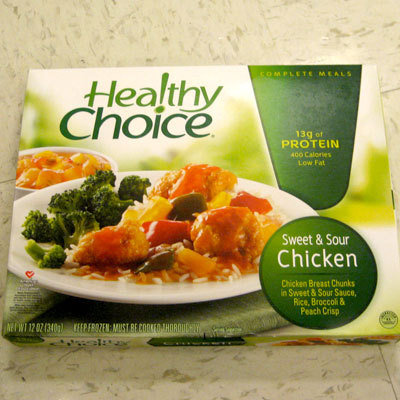 This meal is better than a TV dinner, but there are healthier options from this generally trustworthy brand.

The calories are reasonable, but the meal is high in sugar and sodium, and it has more fat than most other Healthy Choice options—even the Chicken Fettuccine Alfredo and the Country Breaded Chicken! 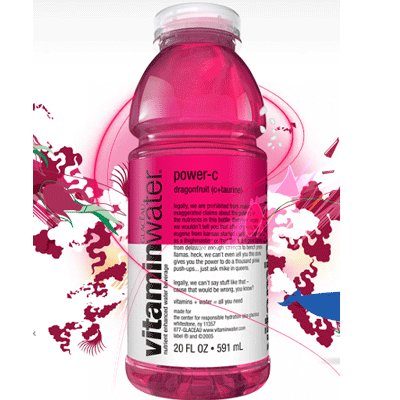 VitaminWater uses the old trick in which the nutrition information on the label is based on a serving size, but the bottle contains multiple servings—leaving you to do the math.

Each bottle contains 2.5 servings of the sugar-sweetened water, so a whole bottle delivers 33 grams of sugar (a can of Coke only has 6 more). That’s a lot of calories when plain water could do the trick.

Choose this instead: New VitaminWater10 has only 10 calories per serving, or 25 if you finish the bottle. But it contains zero-calorie sweeteners. 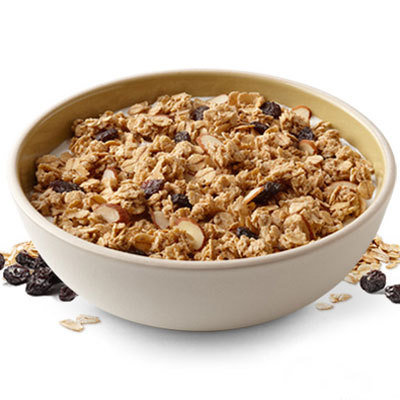 Granola is tricky. Although the name is practically synonymous with healthy, some types—including this cereal—contain a startling amount of sugar per serving. One serving contains 18 grams of sugar, as much as a Twinkie. 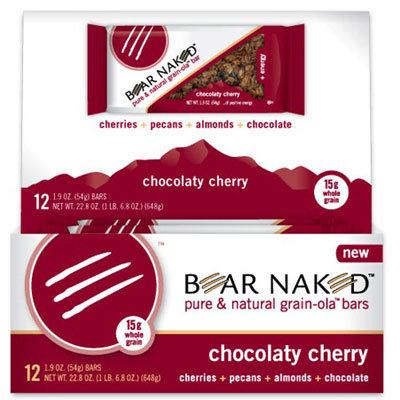 We love Bear Naked for its generally low-fat, low-sugar concoctions, but we just can’t get behind this bar.

It has almost the same nutritional stats as a Hershey’s Sweet and Salty Reese’s Peanut Butter bar. Or you could eat almost three Nature Valley Oats and Honey granola bars for the same intake.

Choose this instead: Barbara’s Crunch Organic Oats and Honey Granola Bar; two bars have only 190 calories, 8 grams of fat, and 10 grams of sugar. 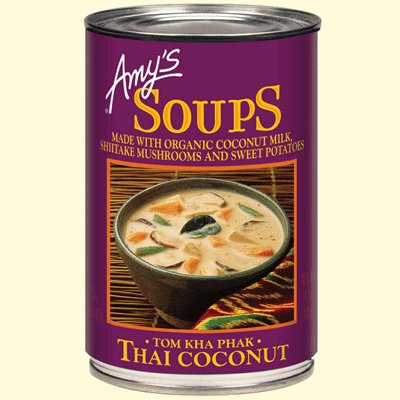 Generally we love anything from this vegetarian brand, but we have to draw the line at this soup. While packed with veggies and protein-powerhouse tofu, one serving has more than half of your daily limit of saturated fat and a quarter of your sodium.

Choose this instead: Lentil Vegetable, one of Amy’s low-sodium soups, is still chock-full of veggies and protein, but with less fat and sodium: 4g fat, 0.5g saturated fat; 340mg sodium. 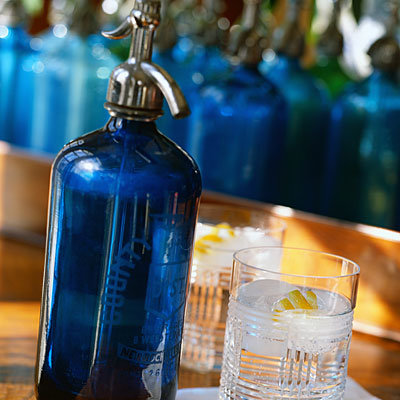 WHAT TO DO When You Can’t LOSE THE WEIGHT

Losing Weight Without Dieting - Why Its Best For Permanent Results