Slow Down For Weight Loss

8/17 10:40:12
Ask anyone who meditates or practices yoga regularly, and they will tell you that either one helps you slow down and get in touch with yourself. I, like many others, have always assumed that being in touch with one's self was a good thing if a little hard to quantify and measure. However, there is one part of us that can be quantified and measured, and that is how much we weigh. As a society, there seems to be a lot more of each of us to get in touch with than there used to be. There are even those that are calling obesity an epidemic, both here in the U. S. and in other countries as well.

There are certainly many people who want to take charge of their lives and bring their own weight under control but who either do not know where or how to start, are not sure how to find the time in busy schedules for regular exercise, or who are simply daunted by the entire mass of data and life style change represented by adopting the proper exercise and nutritional changes that they know must occur.

Therein lies the crux of the matter. Although many people may not be aware of this fact, the weight loss equation has been solved long since. Eat more calories than you burn and you will gain weight. Burn more calories than you eat and you will lose weight. Those without this knowledge pursue all sorts of diet gimmicks, fad diets, and sometimes dangerous diet pills when simply making a few lifestyle changes over time would eventually lead to weight loss and a healthier body. Even those with this knowledge are often confused about what to do and when to do it, or just feel that it is one more straw in the pile that surely will eventually break the camel's back.

While I normally advocate biting the bullet, and not another fudge brownie, and, say as the commercial says, "Just do it!", the fact is that a little helpful tip or hint here or there might help some people start their climb up out of the obesity pit.

One such tip is simply, as the yoga practitioners and people who meditate have known for years, to slow down. Life lived at a hectic pace can not only create stress which can contribute to weight gain through "stress eating" and the action of normal chemicals within the body such as cortisol, but eating too fast can contribute to weight gain as well. In fact, researchers at the University of Rhode Island at Kingston have found more than one way that slowing down at the breakfast, lunch, and dinner tables can help us lose weight.

In one study, participants lowered their calorie intake simply because the researchers told them to take their time. When told to eat as quickly as possible on the other hand, they ingested more calories. Researchers also used such tips as having them lay down their spoons between bites, and chew their food thoroughly, between 15 and 20 times.

This chewing thing is interesting, because I had heard about a "chewing diet" in which participants were to chew their food several times before swallowing. It all sounded a little mystical to me, and I was inclined to write it off until I read more about research at the University of Rhode Island. It seems that when the diner chews the food 15-20 times, several things happen. Apparently, the trigger is that thorough chewing helps to release about 50% more nutrients in the first minute after the food enters the stomach. As a result, blood flow to the digestive organs is raised nearly instantly raising the metabolism. This, in turn, results in a more rapid onset of a feeling of fullness, causing the diner to feel full...and finished...sooner, thus preventing the ingestion of excess calories.

It has long been known that one problem with weight loss is that we simply tend to eat more food than we really need or want. Part of this is the result of the fact that signals of fullness take their own sweet time getting through to the brain, allowing us to take in more food than was really required or desired.

So, slow down. Chew your food carefully. Enjoy the taste and flavor of each morsel. Maybe even take smaller bites. The researchers also found that giving the participants smaller spoons helped. Lists of diet tips have long included the admonition to serve meals on smaller plates as that helped the portions appear bigger and more psychologically satisfying.

Take this little bit of information, add a little bit of exercise, and start making some better choices about what you eat, and you might find that you have created the start of an effective weight loss program.
Men Lose WeightWomen Lose WeightWeight Loss ArticlesLow CarbAbout TipsWeight Loss Management
Related Articles 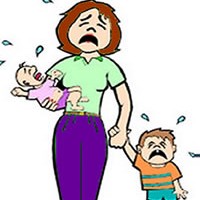