The 10 Most Filling Foods for Diets 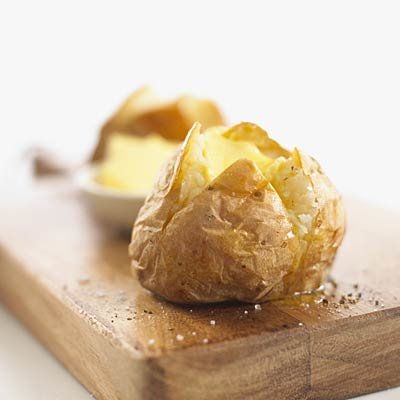 The potato has been unfairly demonized—it's actually a potent hunger tamer. In a study that measured the satiating index of 38 foods, including brown rice and whole-wheat bread, people ranked boiled potatoes highest, reporting that they felt fuller and ate less two hours after consuming them. Though potatoes are often shunned because they're considered high in carbohydrates, they shouldn't be. Whether baked or boiled, they're loaded with vitamins, fiber and other nutrients. Result? You get steady energy and lasting fullness after noshing on them.

Feel even fuller: Eat baked and boiled tubers skin-on to get more fiber for just 160 calories a pop. 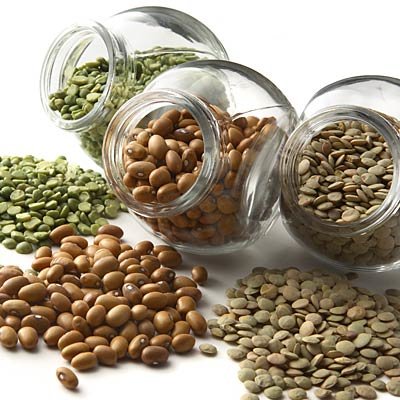 "Soups have a high water content, which means they fill your stomach for very few calories," says Rolls. Broth-based bean soups, in particular, contain a hefty dose of fiber and resistant starch—a good carb that slows the release of sugar into the bloodstream—to make that full feeling really stick. "Once in the stomach, fiber and water activate stretch receptors that signal that you aren't hungry anymore," Rolls says. All this for a measly 150 calories per cup of 10000000642281.

Feel even fuller: Resist the cracker pack on the side in favor of a bigger soup helping. Beans are starchy, satisfying and caloric enough on their own, Rolls says. Hate soup? Throw lentils, black-eyed peas or kidney or navy beans into a vinegar-based salad. 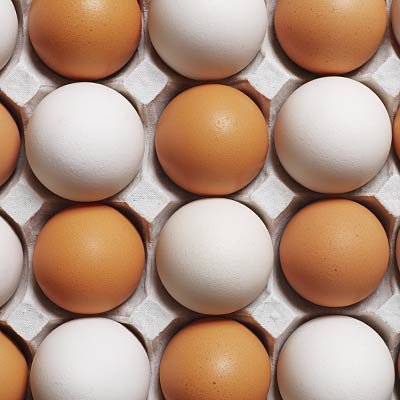 A study from Saint Louis University found that folks who ate eggs for breakfast consumed 330 fewer calories throughout the day than those who had a bagel. "Eggs are one of the few foods that are a complete protein, meaning they contain all nine essential amino acids that your body can't make itself," says Joy Dubost, RD, spokesperson for the Academy of Nutrition and Dietetics. "Once digested, those amino acids trigger the release of hormones in your gut that suppress appetite."

Feel even fuller: Don't discard the yolks—about half an egg's protein lives in those yellow parts. Adding vegetables to a scramble boosts its volume and fiber content for few extra calories (an egg has 78, and a cup of spinach just 7). 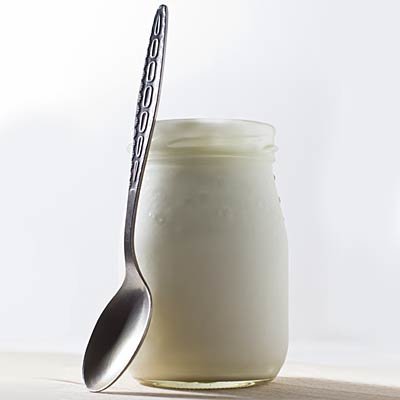 Feel even fuller: Top yogurt with fibrous foods like raspberries (4 grams of fiber per half cup) or a cereal such as Kashi Go Lean Crisp Cinnamon Crumble (9 grams per three quarters of a cup). 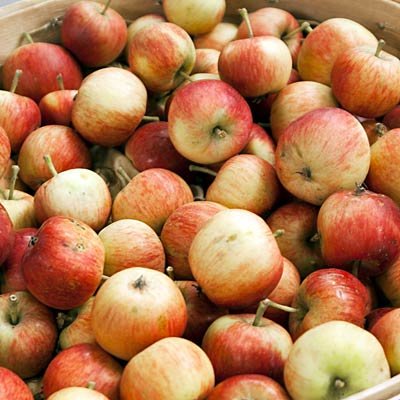 Apples are one of the few fruits that contain pectin, which naturally slows digestion and promotes a feeling of fullness, according to a study in Gastroenterology. In fact, people who ate an apple as part of a meal felt more satiated and ate less than those who consumed a calorically equivalent amount of juice and applesauce. "Whole apples take a long time to eat for very few calories," says Susan Roberts, PhD, professor of nutrition at Tufts University. Your body has more time to tell your brain that you're no longer hungry. That means you can eat lots of this low-energy-density, high-satiety fruit and avoid feeling deprived while losing weight, adds Roberts.

Feel even fuller: Add apple chunks to oatmeal or salad, or slices to a turkey-on-whole-wheat sandwich. 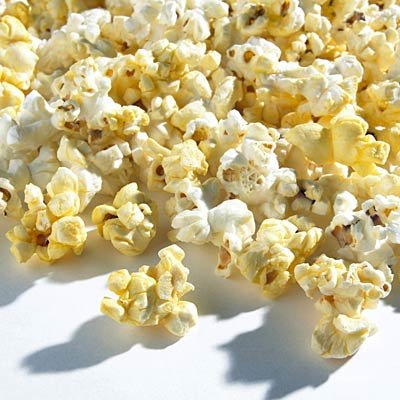 This movie-night fave is a low-energy-density food—for 90 calories, you could eat 3 cups of air-popped corn but just a quarter cup of potato chips. "Popcorn takes up more room in your stomach, and seeing a big bowl of it in front of you tricks you into thinking that you're eating more calories and that you'll feel full when you're finished," Rolls says.

Feel even fuller: Sprinkle on some red pepper. In a recent Purdue University study, people who added a half teaspoon of the spice to a meal felt less hungry. 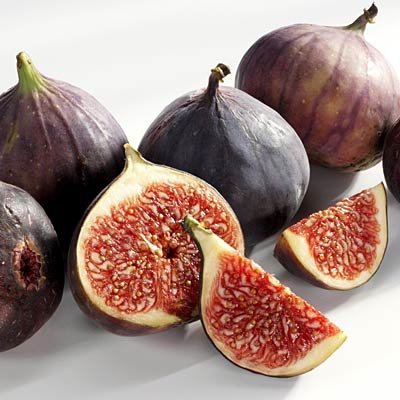 A great natural cure for a sweet tooth, fresh figs have a dense consistency and sweet flesh that's high in fiber (each 37-calorie fig packs about a gram), which slows the release of sugar into the blood, preventing the erratic high caused by cookies or cake.

Feel even fuller: Halve and add protein, like a teaspoon of goat cheese and a walnut. 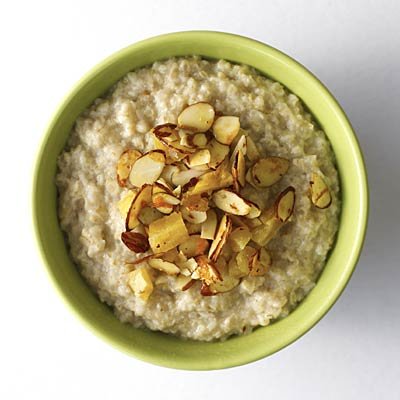 Oatmeal's filling force comes from its high fiber content and its uncanny ability to soak up liquid like a sponge. When cooked with water or skim milk, the oats thicken and take more time to pass through your digestive system, meaning you'll go longer between hunger pangs. 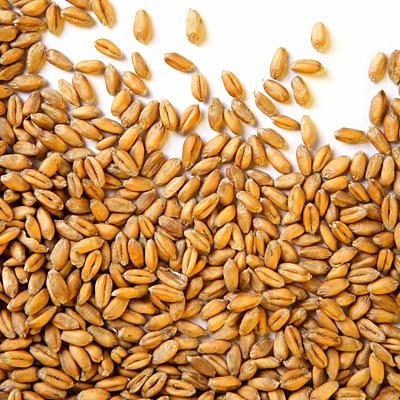 Move over, quinoa. Wheat berries, which are whole-wheat kernels, contain one of the highest amounts of protein and fiber per serving of any grain—6 grams of protein and 6 grams of fiber. "Protein triggers the hormone ghrelin to tell our brain that we are satisfied," Roberts explains, "and fiber activates appetite-suppressing gut hormones."

Feel even fuller: Do what celeb chef Ellie Krieger, RD, does: Toss wheat berries with apples, nuts and other diet-friendly foods to make a super tasty salad (that's her recipe at right). 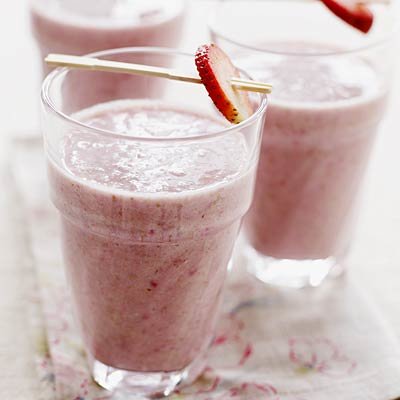 While most beverages don't satisfy hunger very well, drinks blended full of air are an exception: They cause people to feel satiated and eat less at their next meal, according to a Penn State University study. Just be sure you're not whipping your smoothie full of sugary, caloric ingredients like fruit juices or flavored syrups, which will negate the health benefits.

Feel even fuller: Put ice and fat-free milk or yogurt in a blender, add in fruit and give it a whirl. Try strawberries, which are extremely low in energy density—they're 92 percent water!—and bananas, which are loaded with resistant starch. 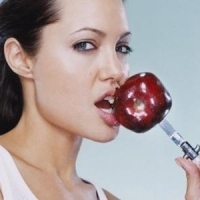