10 New Ways to Start the Year Off Light 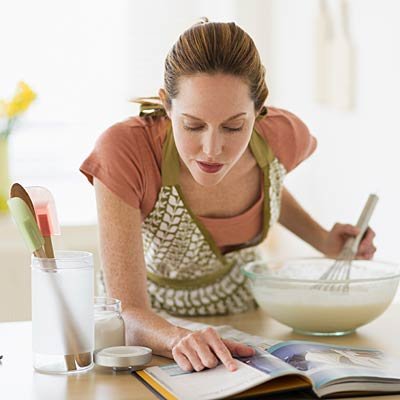 Get reacquainted with your kitchen

It's pretty simple: The more you dine in, the less you'll pig out. A study published this past July by Public Health Nutrition looked at the eating habits of more than 12,000 people and concluded that those who ate at a fast-food or full-service restaurant consumed an average of 200 additional calories a day (more saturated fat, sugar and salt, too) than people who noshed at home. Eating at restaurants should be the exception, not the norm, says study co-author Lisa Powell, PhD, professor of health policy and administration at the University of Illinois at Chicago. Next time you're tempted by the neighborhood Thai place, consider the money you'll save by dining in. (If a family of five eats out only twice a week, at a conservative $40 a meal, that's more than $4,000 a year!) 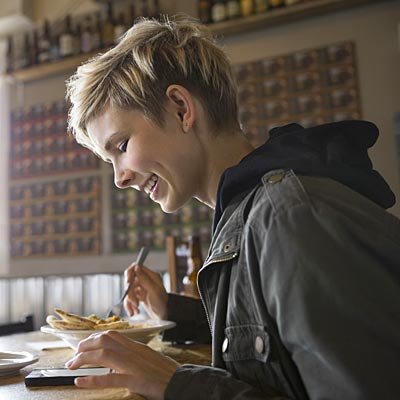 Research shows that getting distracted can be a diet killer. We make about 200 food decisions a day, and we’re not paying attention to most of them, says Cornell professor Brian Wansink, PhD, author of Slim by Design: Mindless Eating Solutions for Everyday Life. Tech gadgets are the biggest offenders, so "power down," says Jennifer McDaniel, RDN, spokesperson for the Academy of Nutrition and Dietetics. "Multi-tasking while eating leads to eating amnesia." 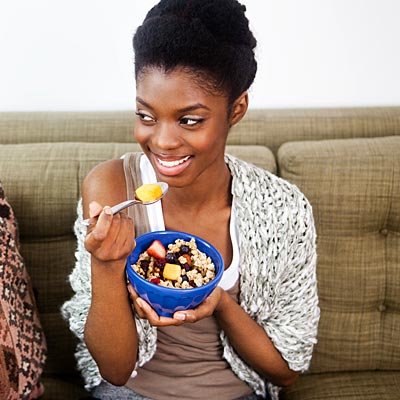 "Women need 30 to 35 grams of fiber a day, but most of us don't get even half that amount," says Rachel Beller, RDN, author of Eat to Lose, Eat to Win. Breakfast is the perfect time to slip it in: "If you front-load, you can get 50 percent of your daily fiber right off the bat," Beller says. "It will increase your satiety and help even out your blood sugars, and research suggests it may get rid of calories in the body. It's a win-win." One of her go-to breakfasts: quinoa (you can buy it already cooked and frozen) with fruit, cinnamon and a sprinkling of fiber-rich chia seeds. 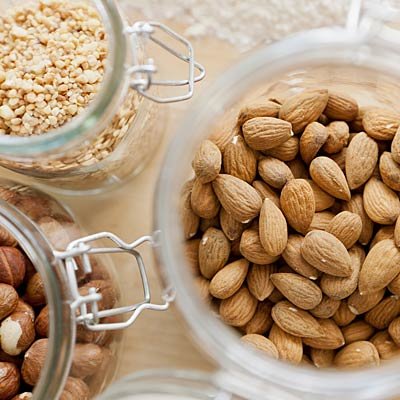 Brush up on basic addition

Your first instinct is to cut out "bad" foods, right? Scratch that. Instead think about what you should add to your diet. "Trying to restrict or banish foods can leave people feeling deprived, like they're in diet prison," says Cynthia Sass, RD, author of S.A.S.S. Yourself Slim. "Focusing on what you should add or replace is a much more positive strategy." Think plenty of produce, protein (fish, poultry, lean meats, eggs), whole grains, nuts and seeds, with the goal of slowly crowding out unhealthy processed foods. Approach snacks the same way, advises Seattle dietitian Kim Larson, RDN, spokesperson for the Academy of Nutrition and Dietetics, who keeps whole-grain popcorn or a handful of nuts within reach in her car's glove compartment. 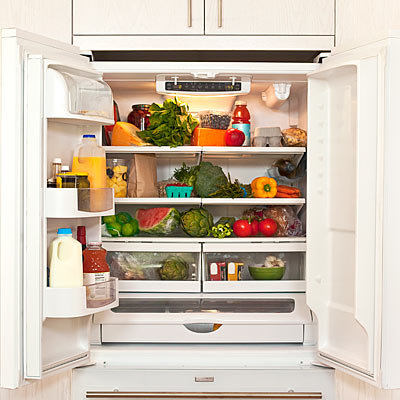 Give your fridge a face-lift

Basically, you want to think out of the (fruit and vegetable) box. "Crisper drawers may have been designed to keep produce fresh, but they're usually the place where fruits and vegetables go to decompose," McDaniel says. If you move produce from those low-visibility drawers to the top shelf of the fridge, you will eat three times more produce, studies show. "I keep my cut-up vegetables in clear containers where I can see them," McDaniel adds. 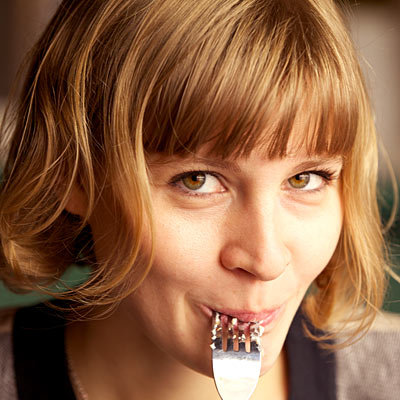 Know this: You can get too much of a good thing

If you feel like you're chowing down on the right foods but still aren't losing weight, look at how much you're eating. Studies show that the average person underestimates the amount she downs in a given day by more than 20 percent. Even worse, the more we eat, the less accurate we are. "If a client is already eating well and still not making progress, I'll tell them, ‘Halve your portion sizes and then rate your hunger,'" Larson says. Sass offers this easy trick for eyeballing portions: "The protein at any meal should be the size of your smartphone, with half a tennis ball's worth of starch (rice or quinoa) and two tennis balls' worth of produce, plus 1 tablespoon of a good fat." 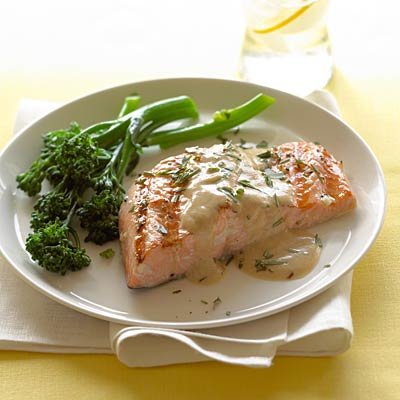 When dining out, instead of focusing on what you're going to have as the entrée, Beller says, zero in on the veggies first: "Two big handfuls, or at least half your plate, should be vegetables. It can be a side, a salad or a soup." See what the restaurant is offering on the menu—broccolini, sugar snap peas, spinach—and ask for double vegetables. Then think about the entrée: May we suggest a simple filet of fish, cooked in a touch of healthy fat? 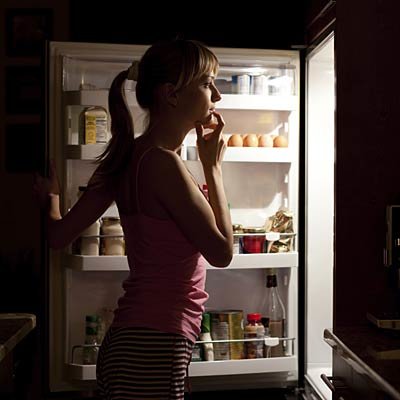 Take back the night

Northwestern University researchers found that late sleepers consumed about 250 more calories a day and had a higher BMI than early birds. "When you absorb calories at night, if your body doesn't have a need for them because you aren't active the surplus calories are sent to fat cells," Sass explains. "To keep my clients from eating after dinner, I have them figure out what it is they're really looking for when they eat at night—are they bored, stressed or lonely?—then I ask them to keep a journal of what they're feeling when they crave food. One client said he ate at night as a stress reliever; now he plays guitar instead. Others get involved in meet-up groups—for example, going for a walk with a neighbor when they're tempted to eat mindlessly. You want to find anything you can look forward to other than munching." If you can't resist a nighttime nibble, make it a planned one. McDaniel's sweet-salty go-to snack: a 100-calorie bag of popcorn, dusted with cinnamon sugar. 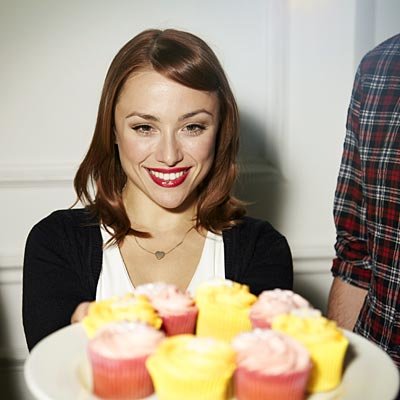 Of course, the easiest way to combat temptation is to avoid it in the first place. But what about situations that are out of your control, like when a co-worker brings cupcakes to a meeting? Learn to ride out the jones. In a study of addictive behaviors at the University of Washington, smokers who were taught how to "surf the urge" cut back on cigarettes by 26 percent after a week; the technique can work for culinary longings, too. Since all cravings eventually pass, imagine yours as an ocean wave, which will build to a crest but ultimately crash and disappear. 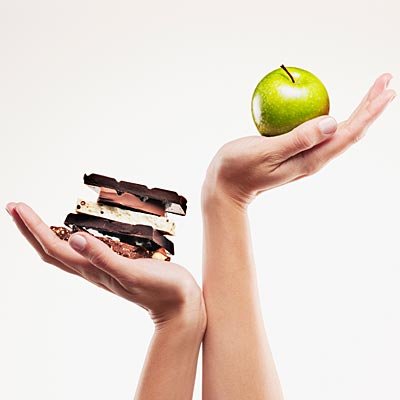 Always have a plan B

You probably know the temptations that trip you up—like that caramel latte calling your name during the afternoon slump at work. So be ready with a specific plan to fight them off. A recent study suggests that an "if-then" tactic can be beneficial. Simply put: "If x happens, then I will do y." In real-world terms, that might translate to: "If my husband offers me a bowl of ice cream while we're watching CSI, then I'll be ready with my own bowl of sliced apples." Whatever you do, just don't reply with: "I can't eat ice cream anymore." A study in the Journal of Consumer Research found that using suble word choices—for example, the more empowering I don't instead of I can't—makes a difference. People assigned to the "I don't" group picked a smart snack 64 percent fo the time; the "I can't" pity-party group chose healthfully only 39 percent of the time. That means if you moan about forbidden foods, you're more likely to hit the Ben & Jerry's in the end. 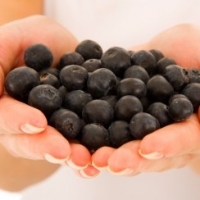 DON'T MISS
Burn Calories the Easiest Ways
Do You Want To Become Skinny? Change Lifestyle For A Skinner You
Exercises To Burn Stomach Fat
The Easiest Way To Lose 20 Pounds In 14 Days
Common Reasons for Food Cravings
Weight Loss - What Price Is Weight Loss?
How Fast Can You Lose Weight On Nutrisystem?
5 Simple Steps to Start Your Weight Loss Program
Why People Gain Weight Faster Than They Lose
How to Take Rapid Loss Shakes Weight Loss Products in Australia?

10 Types of Hunger and How to Control Them

National Nutrition Month®: What It Has To Do With You