Teas of all varieties have been enjoyed by cultures as far back as the ancient Egyptians. In recent years, with obesity on every one’s mind, teas as well as other beverages, foods and more have been touted as the next best suggestion for weight loss before being discredited by a follow up study only months later. Several studies have indicated how beneficial that teas, particularly green and white tea varieties can actually be.

Two rodent studies have provided the most promising information so far. The first, using mice who were already obese was meant to investigate whether green tea would have any effect on weight gain. In that study, researchers used two groups of obese mice, both fed the same high fat diet in unlimited amounts, available whenever the mice wanted it. One group was given the active compound of green tea called epigallocatechin-3-gallate, also known as EGCG in an amount equivalent to ten cups of brewed tea.

The obese mice who were given the EGCG gained weight nearly fifty times more slowly than the other mice despite having the exact same diet and in the same amounts. But, researchers were even more surprised to learn that the mice also had a nearly 30% increase in the level of lipids in their fecal matter than the other mice did meaning the compound was decreasing the amount of fat that the mice were absorbing during their meals.

Neither group of mice had any changes in their appetite at all.

A previous Japanese study completed with rats found that two other compounds found in all teas, namely teaflavins and thearubigins stopped weight gain without affecting appetite. That study applied knowledge to human subjects later with similar results, however it did come with a warning: tea must be drank without milk to be effective. In that same study, the Japanese team found that a certain protein found in cow’s milk both neutralized the compounds responsible for fat fighting in the tea but also blocked the cholesterol blocking abilities as well.

A German health food company’s study done more than two years ago found that white tea, which is technically the earliest harvest of several varieties of teas, reduced the growth rate of new fat cells in the body as well as helping to break down the fat cells already in existence in the body something previously thought to be nearly impossible.

Scientists warn that tea is not the magic elixir that will allow people to eat high fat diets and not have to worry about weight gain or cholesterol. The amounts given to the rodents in these studies is much higher than the typical person’s daily intake, in some cases as high as ten cups of tea. The average person drinks one to two cups of tea per day. Teas do have several health benefits and might be a good suggestion as a beverage in an otherwise healthy diet plan. 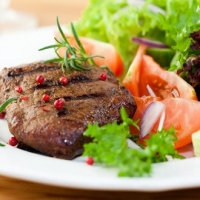 Why Weight Loss So Hard