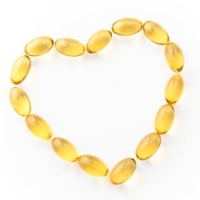 Fish oil has become very popular and does indeed have a lot of benefits in our everyday. First of all fish oil contains the omega 3 fat acid which is well known for preventing inflammation and therefore well used in bodybuilding environments as a diet supplement. One of the big questions is if these omega 3 fat acids really are as effective as they are made to be. While all these statements are supportive and not conclusive, many tests has proven that omega 3 fat acid is helpful in preventing cardiovascular disease, Alzheimer’s and also helpful in reducing blood pressure, heart rate and atherosclerosis.

But does it help us in losing weight?

Well there are three types of omega-3 fat acids that are present in our food and will help us prevent certain diseases. They are known as EPA (Eicosapentaenoic Acid), DHA (Decosahexaenoic Acid) and a-Linolenic or ALA, and are normally derived from fish oil. How and in what way do these acids help us people?

A Japanese test group made some tests on mice, and found out that it boosted their fat metabolism. Another test with four groups of people eating different oils while living equal lives with healthy food and exercising proved that the group eating fish oil had the biggest weight-loss. Same thing was tested in four groups of people and same scenario except that the exercising was left out. This resulted in no extra weight loss from eating the fish oil. So based on the different tests and the fact that there is no real evidence, you would need to exercise to actually benefit the weight-loss that is linked with eating fish oil.

However I would highly recommend that you eat fish oil no matter what, and that is because they benefit you in other great ways. Fish oil boosts your immune system and benefit people who suffer from cancers, heart disease and even diabetes. There are even proves that places like Japan and Norway where they eat a lot of fish has a higher living expectancy rate than other places in the world consuming less fish. So if you haven’t included fish in your diet already, be sure to eat fish a few times a week if possible. Remember to buy wildly caught fish, since fish breed in captive does not produce the same amount of Omega-3 fat acids. Wildly caught fish consumes sea weed which has the Omega-3 acids that we want.

If buying fish is not an option either because of the price or you can’t stand the taste of it, you should consider buying it in capsules as a diet supplement. I hope this has helped you getting a better overview of fish oil and Omega-3 acids. Good luck putting together your diet for a better living.

DON'T MISS
Diet And Exercise Program To Lose Weight
Green Tea Weight Loss
Burn That Fat Having A Walking Physical Exercise
Everloss - Sick of Overly Restrictive Weight Loss Dieting?
Natural Weight Loss Supplements
How to Relax During Your Pregnancy
HCG Drops - The Actual Fat Burner Is Here
Certify Your Fitness Corridors With A Viable Boot Camp In Perth
Weight Loss Tips For Women: Why Food Is A Problem
The Secrets of Weight Loss and Why This Unique System Works Fast!

Eating A Lot Of Vegetables And Fruit Is Very Healthy, But What If We Dont Like Them?

How Many Calories Do You Need To Lose Weight?