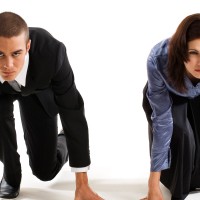 For years, women have battled for equal pay in the job front and equal respect in the home front. But, thanks to their biology, there are several areas where they just cannot compare. One of the most vexing of those is the weight loss area- where men are, hands down the winners for being able to both gain and lose weight at the more rapid pace and to do so with seemingly little effort. But, researchers and experts are convinced that some if not all of the advantage that a man has over a woman in relation to weight loss ease may be mental rather than physical and all focuses on the way a woman's mind works.

A man's body has a higher level of muscle mass by nature even when those muscles are covered in jiggly goo. That helps him to lose weight faster because those muscles burn fat at a higher rate than other types of tissue, even when at rest. On the other hand, a woman's body is biologically designed to hold onto excess fat to prepare it for childbearing. That weight tends to focus around the thighs, buttocks and hips. But, there are other things that can keep a woman from losing weight as easily as a man.

According to research at the Brookhaven National Laboratory in New York, women tend to have more problems related to their thoughts and feelings in regard to food than men do. In other words, women are more likely to obsess over food and what it means to them. Men just eat and are done with it, regardless of whether the food was good, bad or somewhere in between.

Men tend to be more direct and straightforward when they are trying to lose weight, coming up with a set plan and goals and then going forward with them. Women need to adopt a more business like approach without letting their emotions get in the way. Women also need to stop fearing heavy weights. Research study after research study shows that in the case of most women, weight lifting will not only tone them down but will also strengthen their bones and give them a sleeker, leaner appearance. Women lack the testosterone to get really bulky which is typically their biggest fear. However, there are always exceptions to that rule. They should also include protein at every meal which can help them lose weight by allowing them to feel fuller faster and stay full longer than other types of foods.

DON'T MISS
Healthy Weight Loss Tips for Teens - Deciding on a Balanced Diet
Are you sick and tired of getting poor results from your weight loss program?
The Jack LaLanne Diet - Are You Tough Enough?
6 Tricks for A Weight Loss Plan
Find out the Secret Behind the Best Yoga DVD
Healthy Balanced Diet Plans: Learn How To Lose Pure Fat Quickly!
How to Lose Thigh Fat - These Simple Tips Will Make You Shed Thigh Fat Like Crazy
Lose Weight Programs: Finding One That Works For You
How Do You Make It Go Away? – 5 Facts About Body Fat
Want to lose weight: try NanoSlim and Hoodia Diet Pills

Why Diets And Exercise Dont Work - Find Out The Real Truth!