As a college student living in the international dorm, I should have been studying my Parisian roomie's eating habits instead of just coveting her style. In nations with low obesity rates, women know how to eat right and enjoy every bite. "The diets they follow often place an emphasis on whole grains and legumes and use meat sparingly," says Daphne Miller, MD, the author of The Jungle Effect: The Healthiest Diets from Around the World. They're a far cry from the typical U.S. diet, a processed, produce-deficient carb-fest. Although I can no longer use the excuse that I'm a broke college student, I still live on lattes, burgers, and apple cobbler. So I embarked on a 30-day culinary experiment, borrowing secrets from some of the world's healthiest places to slim my 170-pound frame.

Despite baguettes and Brie, French women have the lowest average body mass index in Europe. "It's true that the French eat for pleasure, but they enjoy cream, cheese, and wine in moderation," says Mary Brighton, RD, a health and food blogger who lives in Pau, France.

Eat slowly. The length of the average French meal has decreased in recent years, but it still clocks in at a leisurely 42 minutes. Brighton has a suggestion to help me slow down the pace at which I stuff my face: "Adopt the French habit of eating a three-course meal to savor food and to recognize satiety cues." When I started with salad, I began to feel full a few bites into my second course, pasta, and I left a bit of it on the plate, rounding out my meal with an apple. Something else that worked: listening to music and making meals last for five or six songs. That's about 20 minutes, or the amount of time it takes your brain to register that your stomach is full.

Make lunch the main event. French breakfasts are small, but lunch is a big deal and might include soup, salad, a chicken entrée with at least one vegetable, and a light dessert, like sorbet, says Steven Jonas, MD, a coauthor of 30 Secrets of the World's Healthiest Cuisines. Supper is lighter and later, usually eaten around 8 or 9. "Because the body uses lunchtime calories for the rest of the day, fewer go into storage and turn into body fat," he explains. My midday meal is often coffee and crackers, so I had to take extreme measures to bulk it up. Each night I cooked twice as much as I normally would for dinner and packed about two-thirds of it for lunch the next day. The new portions were perfect; I wasn't starving by supper.

Treat yourself. This I can do: I never met a pint of Ben & Jerry's I didn't like. But that's not the French way. Instead, they enjoy a petite treat at the end of each meal — a piece of dark chocolate, an espresso, or an after-dinner drink. "It signals your brain that it's time to stop eating," Brighton explains. "Having occasional small treats throughout the day also makes you less likely to binge later." I bought a bar of dark chocolate and ate a square after each meal. At first it wasn't easy to stop at one, but I let it melt in my mouth and reminded myself that I had another to look forward to in a few hours. So long, snack attacks!

It's no surprise that the obesity rate in Japan is less than 4 percent: The country's traditional diet has long been touted as one of the healthiest in the world. "People who live in the Okinawa region of Japan, specifically, are four to five times more likely than Americans to live to 100," Dr. Miller says.

Start with soup. Miso soup is part of most meals, including breakfast. "Broth-based soup can help you feel full longer and regulate your calorie intake for the day," says Rebecca Scritchfield, RD, a nutrition counselor in Washington, D.C. A study of more than 5,000 people found that women who ate soup five to six times a week were more likely to have healthy BMIs than those who sipped it less frequently. Sure enough, I was less hungry during the day when I started every meal — even breakfast — with a bowl of miso. Can't get down with soup in the morning? Start lunch or dinner with a bowl (just steer clear of creamy kinds, which can be high in fat and calories).

Brighten up your plate. There's a proverb in Japan that says, "Not dressing up the meal with color is like sending someone out of the house without clothes." The Japanese try to incorporate five hues — red, blue-green, yellow, white, and black — into every meal, says Lalita Kaul, PhD, RD, the author of Healthy Heart South Asian Diet. Adding different shades to your plate (Skittles don't count!) means you'll take in more low-cal, high-fiber fruits and veggies. When I incorporated a rainbow of produce into my diet — plums and peaches for a snack, tomatoes and lettuce on turkey sandwiches, berries atop low-fat pudding — I found that all the fiber kept me full longer.

Stop while you're ahead. Unlike me (I can still hear my mom saying, "We don't waste food!"), Japanese people don't belong to the clean-plate club. In Okinawa, there's a popular saying, "Hara hachi bu," which means "Eat until you're 80 percent full."

"This helps explain why most Okinawans maintain a stable weight between ages 20 and 100, while the average American gains a pound a year after 30," Dr. Miller says. Putting this approach into practice is easier said than done. But this advice from Scritchfield helped: "Serve yourself only half as much as you normally would. Then wait five minutes once you've finished to determine if you still need more food."

People in Sweden, Norway, and Denmark have long had one of the lowest obesity rates in Europe. Only 13.4 percent of the Danish population and 10 percent of Norwegians are obese, and Icelanders have a 50 percent lower death rate from heart disease and diabetes than North Americans, Dr. Miller says.

Better your bread. In Scandinavia the most beloved loaf is rye. "There are two types of fiber: soluble, found in rye, and insoluble, found in wheat," explains Katherine Tallmadge, RD, the author of Diet Simple. "Both make you feel full, but the soluble kind also lowers cholesterol and glycemic response, causing less glucose in the bloodstream, which means fewer blood sugar spikes and cravings." When I ate my turkey sandwich on a single slice of rye (a typical Scandinavian sammie is open-faced), the bread was so substantial that I didn't miss the second slice.

Go fish. Danish people consume more than twice as much fish as Americans, says Arne Astrup, MD, PhD, the nutrition department head at the University of Copenhagen. "Seafood is lower in calories and fat than other protein sources," Scritchfield says. And much of the fat in the fish that's popular in Scandinavia — herring, tuna, salmon, mackerel, and cod — is heart-healthy omega-3s. In an eight-week study, researchers from the University of Iceland found that overweight people who ate three to five servings of cod a week lost more weight than those who scorned seafood. So I ate tuna salad (made with salsa instead of mayo) for lunch a couple of times a week, and I grilled salmon frequently.

Hit the farmers' market. But not just in the summer. The Nordic diet is full of cold-climate vegetables — cabbage, cauliflower, kale, and brussels sprouts — and mushrooms, the kind of produce that is loaded with flavor and makes a lean meal feel heftier, Dr. Astrup says. I've typically drenched them in salt and creamy dressing, but I loved Scritchfield's suggestions: roasted beets with grapefruit and basil, and stir-fried brussels sprouts with low-sodium soy sauce and honey.

In one study, people who consumed the traditional diet of the Mediterranean (key elements include produce, healthy fats, whole grains, lean protein, and red wine) for 25 weeks lost an average of 8 percent of their body weight.

Get an oil change. Extra virgin olive oil, a cornerstone of the Mediterranean diet, may help control your appetite. A study from the University of California, Irvine, found that the oleic acid it contains triggers the production of a hunger-curbing compound in the small intestine. I've always used the golden oil in dressing, but I also marinated meat in it with salt and pepper. And because I learned from Mary Flynn, PhD, RD, a coauthor of Low-Fat Lies: High-Fat Frauds and the Healthiest Diet in the World, that the body needs fat to absorb the beneficial compounds in produce, veggies roasted in olive oil became my go-to side dish.

Spice things up. Mediterranean cooks are all about fresh herbs — basil, dill, bay leaf, fennel, and mint — and spices. These weight-loss secret weapons pack serious flavor, allowing you to cut back on high-cal ingredients. Alas, in the kitchen I'm more Paula Deen than Giada De Laurentiis: I use a lot of salt, sugar, and butter. "Buy at least one fresh herb a week and add it to your meals," Scritchfield suggests. I learned to love cilantro in chili, where it made my usual dollop of sour cream unnecessary.

Use meat sparingly. Supersized steak dinners are uncommon in the traditional Mediterranean diet; meat plays a supporting role and is used to add flavor. "The amount of meat consumed by Americans is a large contributor to excess weight," says Flynn, who notes that it's also linked to heart disease and cancer. I found some new vegetarian faves: portobello burgers and baked spaghetti squash. I never felt weighed down after dinner, and — bonus! — I saved cash. "Meat is probably the most expensive part of the grocery bill," Flynn says.

This four-week staycation has been better for my waistline than any vacay I've taken. I dropped five pounds! And some of the healthy changes have stuck: I planted an herb garden on my balcony; meatless Mondays (Thursdays, too) are a staple in my household; and my pantry is stocked with dark chocolate so rich that I don't want to stuff the whole bar in my mouth. Turns out, a bit of global inspiration was just what I needed to shake up my all-too-American eating habits. 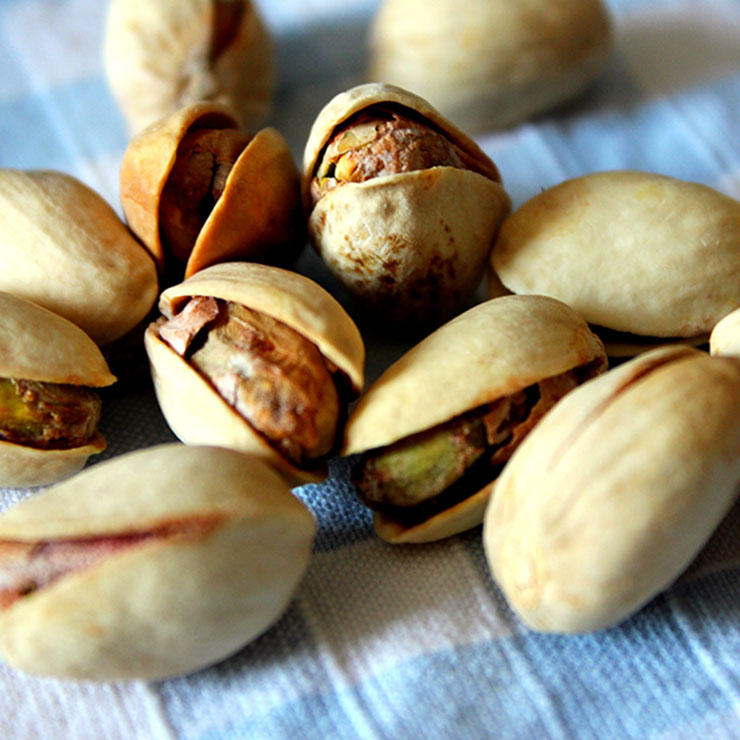 DON'T MISS
5 Weight loss myths for a safe weight loss
12 Ways To Lose Weight Without Dieting
Top 6 signs that you might be depressed (Video)
How To Integrate Convenience Foods Into Your Diet
Conjugated linoleic acid and loss
How To Stop Falling Off The Diet Wagon
Helpful Tips To Losing Your Extra Pounds
Weight Loss Myths And Corresponding Facts
Don’t Loss Your Hair! Read These Tips!
I Have No Time! and Other Workout Excuses, Busted