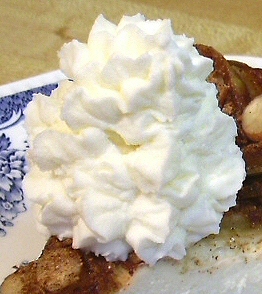 Place all of the ingredients in a large, deep mixing bowl. Beat on low speed with an electric mixer until combined. Beat on high speed until thick and fluffy.

You can store the whipped topping in a plastic container in the freezer. Thaw in the refrigerator overnight or at least 8 hours before using.

I put my whipped topping in a quart size zipper bag, with one of my cake decorating tips and coupler inserted into one corner of the bag, to get the fancy look you see in the picture.

* Or use white chocolate or cheesecake flavor pudding mix.

Although vanilla pudding mix makes the whipped cream taste a little like pudding, this is very good and would make great substitute for Cool Whip in recipes. It almost reminds me of the filling in a Hostess Twinkie (not that I'd know what that tastes like!). I also tried a batch with white chocolate pudding mix and I like that even better. It doesn't turn yellowish like the vanilla pudding mix does and it has less of a pudding flavor and more of a whipped cream taste. I think it would also work very well as a frosting for a cake if you add a little Splenda to make it sweeter. That's the white chocolate version in the photo above.

UPDATE: I just tried this with cheesecake flavor pudding mix and it may just be my new favorite flavor. It has a little more flavor than the white chocolate, but it's not quite as strong and yellow as the vanilla.

Prepare the same as directed above. The original Whipped Topping is very thick and would be great as a frosting on a cake or to spread on scones or muffins, but it's a little stiff to serve like whipped cream. I found that using a teaspoon less pudding mix produces a topping that's more like whipped cream or Cool Whip in thickness. The flavor won't be as strong, but it will taste more like regular whipped cream yet it will be thick and stable. As a bonus, you'll shave a couple carbs off the batch.