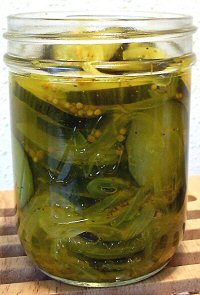 Slice the cucumber into 1/4-inch thick slices. Mix all of the ingredients in an 8-cup glass measuring cup or microwaveable bowl. Microwave on HIGH 8 minutes, stirring twice, until crisp-tender. The pickles should be translucent, but not too soft. Rinse the canning jar with very hot water to prevent cracking, then spoon the pickles into jar. Pour all of the liquid over the pickles. Cool, cover, then chill well. Store in the refrigerator.

Makes 1 pint or about 8 servings
Do not freeze

* I used an English cucumber

These will probably be the easiest pickles you'll ever make and if you've never made pickles, these are so easy that anyone can make them. It may look like they won't all fit in the jar, but if you spoon them in gradually and push them down a bit, they should all fit. Since these are not pressure canned, they must be stored in the refrigerator.

I based the carb counts on the cucumber plus 1/4 of the brine, which is the amount likely to be absorbed by the pickles. There is a slight carb difference between using granular Splenda and liquid, but per serving it comes out about the same or close enough.