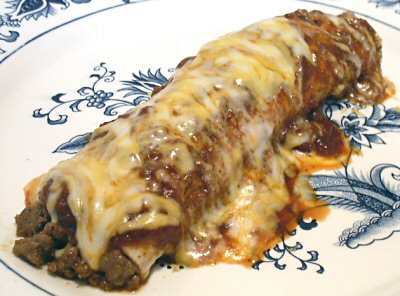 In a medium pot, cook the onion in oil until soft and slightly browned, about 10 minutes over medium-low heat. Add the garlic andspices. Cook and stir until fragrant, about 30 seconds. Add the tomato sauce, Splenda and water; bring to a simmer. Simmer covered for at least 8 minutes, stirring occasionally.

* America's Test Kitchen recommends Hunt's brand tomato sauce and that just happened to be what I had on hand. However, be sure to read the label because Hunt's sometimes has added sugar. The cans that I bought didn't.

This recipe came from America's Test Kitchen's TV show. There aren't any carb savings with this sauce over buying commercial enchilada sauce but at least you'll know that there is no sugar or starch in it. I've yet to find a brand that doesn't have at least one of those ingredients. The Pace brand enchilada sauce that I normally use has 32 net carbs per 2 cups. There's only one thing I might change the next time I make this and that's to cut back on the salt. I'm not sure that it needs added salt since there is already salt in the tomato sauce and the chili powder. The sauce wasn't too salty, but I think it could be a little less salty. I did increase the sweetener by 2 teaspoons. You can try starting with 2 teaspoons and see if you think it needs more. I thought it was slightly bitter without the extra sweetener.

I don't see any reason to spend the money on commercial enchilada sauce anymore when I can make 16 ounces of this for under a dollar. This tastes just as good or better. I think that this sauce would be fine for induction if you limit it to a tablespoon or two per serving.

The enchilada in the photo was made with 1/4 piece Lavash bread with some leftover taco meat inside. I rolled it up and poured on 2 tablespoons of the enchilada sauce and about 1/2 ounce of cheese. I microwaved it about a minute on 50% power to melt the cheese. This has about 5 net carbs. Click the photo to see a close-up.

UPDATE: I thawed what was left from the batch that I'd made and it separated slightly and needed to be stirred very well before using. Although not quite as smooth as before freezing, it worked fine in my recipe.

UPDATE 5/26/11: I've tweaked the recipe a bit. I thought it came out a little too thick so I've added more water. I also cut the salt back to 1/4 teaspoon but I think that even 1/8 teaspoon might be plenty since the tomato sauce is already salted. My chili powder also contains salt. If yours doesn't, you may want to use the original 1/2 teaspoon. I've also decided to simmer the sauce in a covered pot rather than uncovered. The sauce was too thick anyway and covering the pot kept it from splattering all over the stove. Lastly, I simmered my most recent batch for an hour. I'm not sure if that made any difference in the flavor but I figured that it couldn't hurt. I've adjusted the nutritional counts because the recipe makes more with the additional water and because it doesn't reduce at all with a cover on the pot.

In case you're wondering why two 8 ounce cans of tomato sauce plus 1/2 cup of water doesn't make 2 1/2 cups of enchilada sauce, that's because it's 8 ounces of tomato sauce by weight, not volume. An 8-ounce can of tomato sauce actually contains a little less than 1 cup.