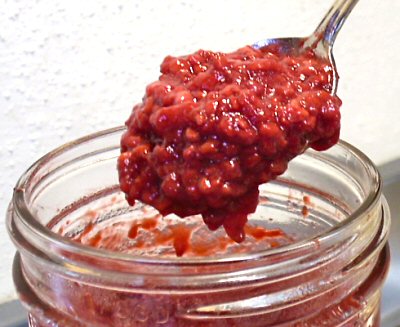 Sprinkle the gelatin over the water and let stand 5 minutes to soften. Meanwhile, put the berries, Splenda and lemon juice in a pot over medium heat. Cook, stirring often until the berries soften and break down. Stir in the gelatin just until dissolved. Do not boil. Cool then pour into a pint container. Cover and chill at least 2 hours until set. This jam would not be suitable for use in baked goods or anything that would be heated.

This came from Dana Carpender's "Every Calorie Counts" page 484. I had to adjust the recipe because frozen berries come in 12-ounce bags, not 16 ounces. I left all the other ingredient amounts the same as originally called for. Dana called for blackberries but I used raspberries. At first I didn't think it was going to set up but after about 2 hours of chilling it was fine. I do think it's a little too tart for jam and I would double the sweetener next time. That won't affect the carb count if you're using liquid Splenda but it would add about 1 net carb per tablespoon if you're using granular. I plan to use this as a dessert topping.

UPDATE: By the next day the jam became too thick to be spreadable. I'll try using just a teaspoon of gelatin next time.