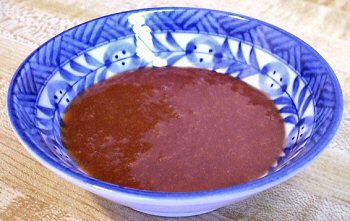 Peel and remove the pits from the plums. Cut each one into eighths. Place in a microwaveable bowl and microwave on MEDIUM power about 4 minutes until soft. Place in a medium saucepan and add the remaining ingredients except the xanthan gum. Bring to a boil. Reduce the heat, cover and simmer 30 minutes. Puree in a food processor until smooth. With the processor running, slowly sprinkle the xanthan gum through the feed tube. Chill well before serving.

This was a bit of an experiment. A friend of mine had recently created a high carb plum sauce to serve over roast duck and I wondered if I could come up with a lower carb plum sauce. Plums were on sale this week, so I gave it a go. I'm very pleased with how it turned out. It came out pretty thick even before adding the xanthan gum, but I wanted it to be more like the real thing so I added some. At first it wasn't quite sweet enough so I added the pineapple Da Vinci syrup. It was still a bit tart and the color wasn't all that nice so I decided to try adding a little raspberry syrup. That gave it a nice red color and the sweetness is just about right. I'm not sure if microwaving the plums is all that necessary, but I think it did speed up the cooking time a little. Since the plums do have quite a bit of sugar, this is only suitable for the later stages of Atkins.

By the way, a tablespoon of commercial plum sauce or sweet and sour sauce has 5 carbs according to MasterCook. That may not seem like much more than my low carb version, but once you start using more than 1 tablespoon per serving, those extra carbs would add up.