Whisk the sour cream and cream until smooth. Whisk in the water, adding more if needed to make a pourable sauce. Put this in a squeeze bottle and use to drizzle over taco salads and other Mexican foods. Shake well before serving.

Makes 10 tablespoons
Do not freeze

I found this idea in "The Low-Carb Cookworx Cookbook" but I had to adjust it a little. After whisking the sour cream and cream together, the cream thickened right up and wasn't pourable enough to get into my squeeze bottle. A little water did the trick. I usually find that when I spoon sour cream straight out of the container onto my food, I would end up with just one blob in the middle of my plate and would often end up eating more than I should. With this squeeze bottle mixture, you can evenly dispense the sour cream over the food for more even coverage and more control over the amount. 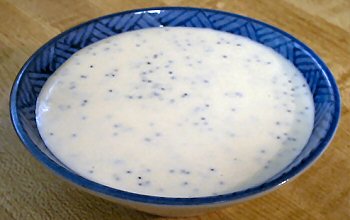