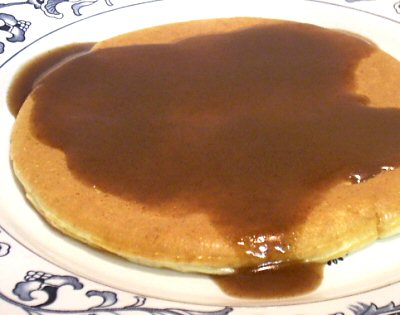 Mix the oil and xanthan gum in a 2-cup glass measuring cup. Add the butter; microwave on HIGH about 40 seconds to melt the butter. Whisk in the remaining ingredients. Microwave on HIGH about 30 seconds. Whisk well, then let stand a few minutes to allow the syrup to thicken. You can serve this warm or let it cool to room temperature first. I recommend storing it in the refrigerator.

I used the basic Cinnamon Pancake Syrup recipe and turned it into a plain maple syrup. I normally use Walden Farms pancake syrup but I think I like this even better and it's a heck of a lot cheaper. Walden Farms also has a slight chemical aftertaste that this doesn't have. Although I used the photo from the Cinnamon Pancake Syrup recipe, this syrup doesn't come out quite as dark as shown in the photo.