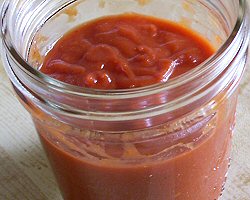 This recipe is featured in "Low-Carbing Among Friends - Volume 2" on page 312.

Mix all of the ingredients well. Cover and simmer for 1 hour. Cool then chill before serving. Keep refrigerated.

Makes 2 cups or about 32 tablespoons

I finally had a chance to try some Heinz Reduced Sugar Ketchup (formerly called Heinz One Carb) and wanted to get as close as I could to creating a good copycat ketchup. My biggest stipulation was that I didn't want to have to cook my ketchup. I wanted it to be just as easy to whip up as my previous recipe. I think I've come pretty close to the Heinz. The main things that are missing in my recipe are the deeper, cooked flavor and the excess salt. I decided not to try and copy the saltiness since I thought the Heinz was overly salty. I used 1/2 teaspoon salt, but feel free to try up to a full teaspoon if you want yours to be as salty as the Heinz. I like the consistency and flavor of this version much better than my Better "Heinz" Ketchup. Adding tomato sauce made all the difference. Even if this isn't identical to the Heinz ketchup, I think it tastes very good and I'm happy with the flavor.

In case anyone is interested, I figured out one day that it costs about $.97 to $1.16 to make a batch of this ketchup. I have to pay an average of $2.00 for a 14 ounce bottle of Heinz low carb ketchup depending on where I buy it.

UPDATE 3/16/11: I made a few tweaks to the recipe this time. Except for the salt, I doubled all of the seasonings. I also added the equivalent of another tablespoon of sweetener. The recipe above still calls for the original quantities. I didn't edit it because the recipe is still good made that way. This time I simmered the ketchup on the stove for about 20-30 minutes and I think that helped blend the flavors a little better. It also helps the constency greatly. Cooking gives the ketchup a smoother texture and it doesn't separate and get watery over time like the uncooked version does. I do recommend covering the pot because the ketchup will get too thick otherwise.

UPDATE 5/14/12: To avoid confusion, I've edited the recipe ingredient list and instructions to reflect the way that I now make this recipe. I've also adjusted the nutritional counts.