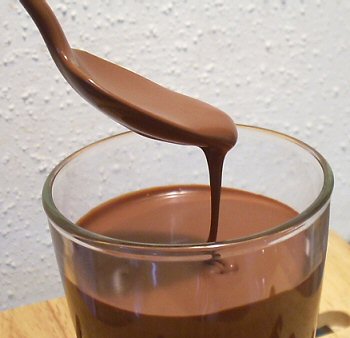 Melt the butter in a medium saucepan. Whisk in the cocoa to blend. It will be very thick. Mix the cream and water; gradually whisk into the cocoa. Add a little at a time and be careful of gentle. The cocoa has a tendency to splash out of the pot and you don't want it on your clothes. Once the cocoa is blended well and the mixture is smooth, remove from the heat and whisk in the salt, sweetener and vanilla. Cool and store in refrigrator. It thickens a bit on cooling, but is pourable.

I found this recipe in a Penzeys spice catalog and thought it might work for low carb. The Splenda does make it a little bitter, but I think it would be fine mixed into coffee or used to make a chocolate or mocha shake-type beverage. I didn't have anything low carb on hand to test it on, so I mixed a couple tablespoons into some regular white milk. It tasted quite a bit like Nestle's Quik milk.