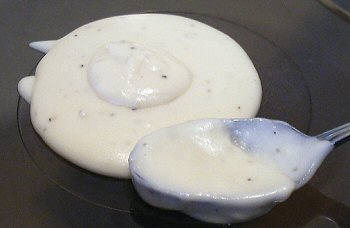 Melt the butter in a small saucepan; whisk in the Carbalose flour until well blended and no dry bits remain. Cook over medium-high heat about one minute to help toast the flour a little. Whisk in the milk and seasonings all at once or gradually if you're not experienced at making white sauces. Cook and stir constantly over high heat until mixture boils and thickens. Sauce will continue to thicken as it cools.

Makes about 1 cup
Do not freeze

* 1/4 cup made a very thick sauce, but 2 tablespoons will not thicken at all. I suggest trying 3 tablespoons for a thinner white sauce.

TIP: The sauce will thicken more quickly if you heat the milk in the microwave before adding to the flour mixture.

This was my second experiment with making Carbalose sauces. I wanted to see if using milk would increase the thickening power over using water/broth and that does seem to be the case. That's why I recommend using half cream and half water rather than all cream. I think you'd end up with pudding otherwise. I used regular 2% milk for this test, but I'm pretty sure that Carb Countdown milk would work the same. I didn't plan to eat this sauce so the carbs weren't important at this point. You may detect a slight off taste from the flour, but a few spices should cover that pretty well.

If you are following a regular white sauce recipe, the standard 2 tablespoon flour to 2 tablespoons butter will not work. You can cook and whisk until the cows come home and it will not get any thicker. Since 4 tablespoons of Carbalose produced a very thick sauce, I'm fairly sure that 3 tablespoons will make a nice, medium white sauce. Use this thicker version in a casserole where the moisture of other ingredients might thin down the sauce a bit.

A batch of white sauce made with 2 tablespoons regular all-purpose flour would have: 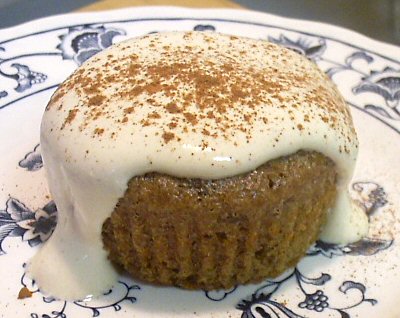