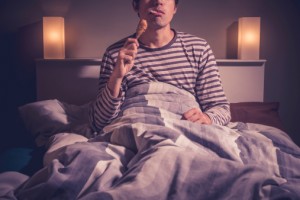 In nocturnal eating syndrome (NES) the individual can eat once, twice or even more throughout the night while they are unconscious, and they are often not aware of what they are doing. In a sleep-related eating disorder (SRED) an individual consumes nearly one-quarter of their daily calories in the nighttime as a means to fall asleep. In SRED individuals tend to have insomnia and believe eating can help them sleep. 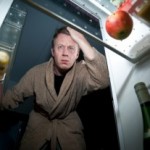 In SRED the person is unaware that they are eating throughout the night. Meals consumed tend to be high-fat and in excess. Sometimes the person may be able to recall the event, but generally there is a strong lack of awareness.

A person with SRED will appear to wake up, go and eat, and return to bed. Similar to sleepwalking, it can be difficult to wake up a person with SRED. Even if the person is not hungry or thirsty they will experience at least once episode a night where they go and eat. Food during an episode is often consumed quickly and tends to be of high-sugar and fat content.

Sleep eating has potential to be quite dangerous. For example, if the person attempts to make a hot meal or cuts themselves while using a knife. Sometimes the individual will leave the kitchen in a messy state, which may help them recall what occurred when they wake up the next morning.

Other complications associated with SRED are related to indigestion; in the worst-case scenario a person consumes things that are not food, such as cigarettes. It’s important to keep things that may pose a threat to health if ingested out of the kitchen. 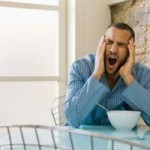 Nocturnal eating syndrome (NES) is associated with insomnia. Individuals have strong urges to eat at night, and they believe that eating will help them sleep. Although it doesn’t fit the typical criteria for eating disorders, it was entered into the Diagnostic and Statistical Manuel for Mental Disorders (DSM) under “Other specified feeding and eating disorders” as an alternative form of eating disorders.

In NES individuals are fully conscious and aware they are eating at night. NES sufferers do not normally consume large amounts of food; their eating has been linked with their emotional state. Jillon Vander Wal, Ph.D., told Psychiatry Advisor, “According to the biobehavioral model of NES, an inherited trait or predisposition for NES, when combined with stress, reduces the amount of serotonin in the brain, thereby dysregulating circadian rhythms and decreasing satiety. This model suggests that we can intervene in several ways to reduce the symptoms of this disorder.”

Signs of a nocturnal sleep disorder include:

The first step to treating SRED and NES is to see your doctor to rule out any other medical condition. A sleep test may be advised for further clarification.

Medication can be prescribed to control appetite and aid in weight loss.

If depression is the cause of SRED or NES, treating is can improve the conditions. Antidepressants may be prescribed as well.

When it comes to high blood pressure – or hypertension – there are many factors that come into play: Diet, weight, smoking and alcohol use can all be attributed to your rising blood pressure. In fact, lack of sleep is also a factor. Getting a good night’s rest not only determines your energy level the next day, but plays a large role in hypertension. Continue reading… 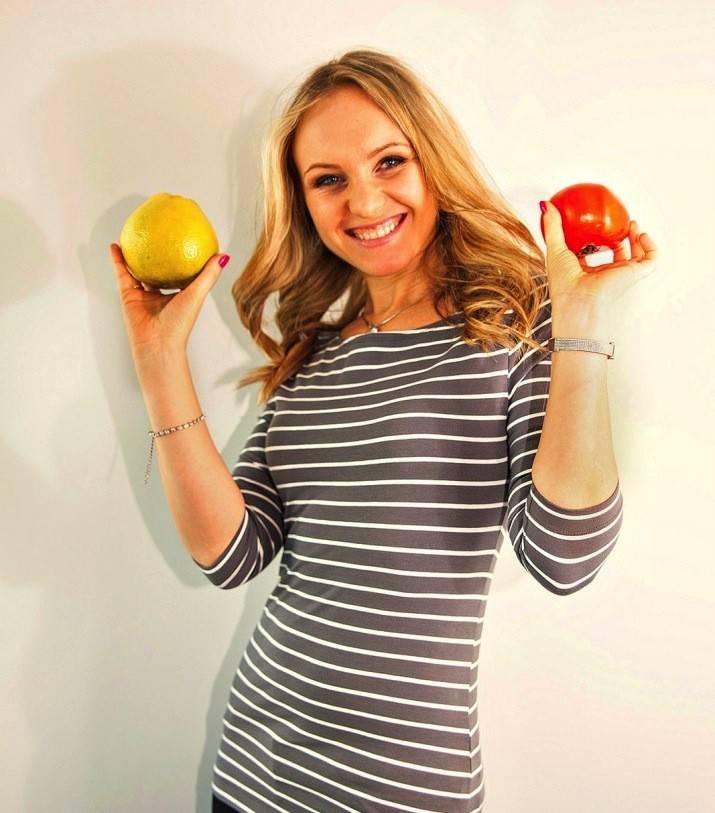 Some Fitness Ideas For The Adventure-Minded Individual