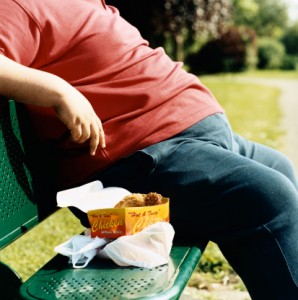 Eating a high-fat diet prompts our brain’s immune cells to start consuming the connections between our neurons, according to a new study. When a person is consuming a high-fat diet and becomes obese as a result, the immune cells in the brain, which are normally very active, become sedentary. Their inactivity prompts the microglia to consume the neural connections, or synapses. When the microglia eats the synapse it can lead to cognitive impairment.

According to Dr. Alexis M. Stranahan, a neuroscientists from the Medical College of Georgia and the study’s corresponding author, “On the one hand, that is very scary, but it’s also reversible, meaning that if you go back on a low-fat diet that does not even completely wipe out the adiposity, you can completely reverse these cellular processes in the brain and maintain cognition.”

That means, according to the study performed on mice, consuming a low-fat diet for two months can reverse the cognitive impairment as body weight begins to decrease and return to a normal, healthy level. Basically, the study shows how fat is bad for the brain.

When a person gains too much weight, their body produces inflammation. That inflammation causes an autoimmune response in the microglia. Instead of eating infections and other waste in the brain, when the mice were obese their microglia focused instead on overeating. Dr. Stranahan said, “Normally in the brain, microglia are constantly moving around. They are always moving around their little fingers and processes. What happens in obesity is they stop moving. They draw in all their processes; they basically just sit there and start eating synapses. When microglia start eating synapses, the mice don’t learn as effectively.”

The researchers studied male mice, broken down into two groups. The first group consumed a diet that was 10 percent saturated fat, while the second group ate a 60 percent fat diet. Aside from the levels of fat, the diets were relatively similar and built to resemble a healthy human diet versus a diet consisting of fast food. The mice were examined for weight, insulin levels, food intake and glucose levels at four, eight and 12 weeks. The scientists also measured the hippocampus for levels of synaptic markers, to see how the brain was being affected.

At the 12-week examination, the 60 percent fat group were obese and had reduced brain function. “When you get out to 12 weeks, you start seeing great increases in peripheral obesity. While you don’t see insulin resistance, you also start seeing loss of synapses and increases in inflammatory cytokines in the brain,” explained Stranahan.

After the 12-week check-up, half the high-fat mice group were switched over to a low-fat diet. Although they maintained more body fat than the consistently low-fat diet group, they were able to return to a normal weight. The half that remained on the high-fat diet continued to gain weight and inflammation, which caused more synapses to be lost.

According to Dr. Stanahan, a healthy brain is able to develop and refine itself, but obesity stimulates the microglia to stray from their normally helpful, immune response course. In a healthy brain, the microglia “allows you to keep only those synapses that you need or the synapses you have been using. Fat dramatically alters their dynamic. Instead of doing garbage disposal, they are taking your mailbox, your front door, your kitchen sink and all the stuff that you need, and not doing their job of getting rid of trash.”

The findings of the study were published in Brain, Behavior, and Immunity.

DON'T MISS
Weight Loss Tips for Obese Women
A New Take at the Master Cleanse Application
How To Diet Healthily
8 Key Weight Loss Tips
Free Fast Weight Loss Tips
How To Quit Retaining Water – Without Dangerous Diuretics!
How to Cut Calories Gradually
Weight Loss: More Than Looking Better
Can You Really Move It and Lose It?
How to Lose Weight Naturally After Pregnancy

The Easy Habit That Left Me 22 Pounds Lighter (And Happier)